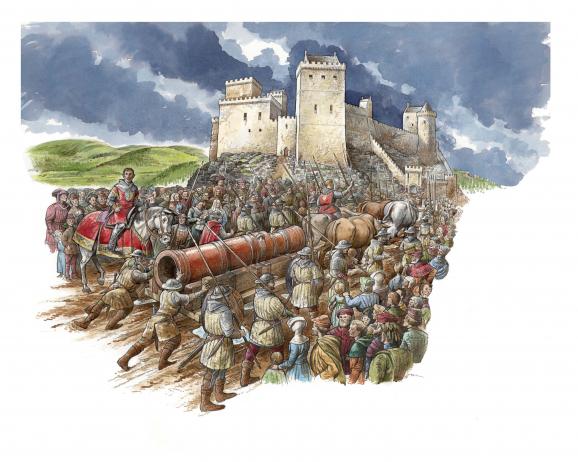 The stories that make the history of Scotland’s number one paid for visitor attraction so fascinating have been re-written following consultation with archaeologists, historians and other experts to create new interpretation at Edinburgh Castle.

Colourful and dramatic illustrations reconstructing some of the tempestuous events that helped shape the nation’s history have been installed at the site, following months of meticulous research by Historic Scotland.

More than 30 specialists within and outside the agency contributed their expertise to the project. Huge amounts of written material and images were also studied, to produce an unparalleled resource that will bring the story of the Castle to life for the hundreds of thousands of people who visit the Castle.

Director of Commercial and Tourism at Historic Scotland, Stephen Duncan explained: “The new interpretation offer a surprising amount of detail. In some cases, the content might alter preconceptions, often contradicting popular myths.

“Each reconstruction focuses on a key episode in the history of the Castle. We have made them as accurate as possible, but in cases where expert opinion was divided or the evidence ambiguous, they inevitably involve elements of informed speculation. Where possible, the faces in the illustrations are based on historic images.”

As well as the broad range of scholarship within Historic Scotland, staff from the National Museums of Scotland, Glasgow Museums, the universities of Edinburgh, Dundee, Glasgow and St Andrews, and the Royal Artillery Museum were among those who helped create the new interpretation.

The newly interpreted stories include:

·      The arrival of the Romans, showing how the hill fort that predated the Castle would have been an important centre for diplomacy.

·      A 12th century precursor to today’s parliament, with an assembly of nobles and clergy at the Castle, called by King David I.

·      The firing of Castle’s guns on Edinburgh by its Redcoat garrison, when the Old Town was occupied by the Jacobites in 1745.

·      The arrival of giant cannon Mons Meg in 1457, when its now-famous barrel was painted lead red.

Seven new panorama illustrations showing views of Edinburgh have also been installed at the Castle. These pick out key features in the spectacular landscape and skyline. Two show the New Town under construction in the late 18th century when many familiar landmarks were being built – and many others had yet to be conceived.

Included in the new interpretation at Edinburgh Castle is this never-before-seen recreation of the New Town, by David Lawrence. The illustration captures the mid-point in its construction, as seen from Castle’s Argyle Battery. Historic Scotland used contemporary images, pictures of stone samples, plans and paintings to create the image. The perspective was altered to raise the level of Queen Street, allowing the full extent of the New Town to be appreciated. Featured buildings include Hume’s Mausoleum, Trinity Collegiate Church, Assembly Rooms and the remnants of the Nor’ Loch, with Leith and Newhaven in the distance.

Stephen said: “Interpretation lies at the heart of Historic Scotland’s mission to present our built heritage effectively and imaginatively to visitors. The stories unique to each site bring those special places to life, and the unprecedented research that has gone into these new panels gives an added dimension to one of the nation’s most important and cherished attractions.”

Mons Meg arrives at Edinburgh Castle in 1457, in its original red colour. The weapon was a gift from the Duke of Burgundy and was kept safe in the Castle.

All information and photos courtesy and copyright Historic Scotland