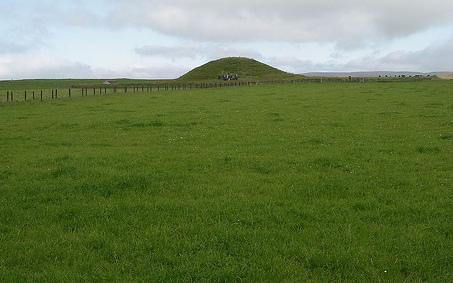 People across the globe will now be able to enjoy one of Orkney’s most enigmatic Neolithic monuments after Deputy First Minister Nicola Sturgeon unveiled a new ‘virtual’ tour of Maeshowe chambered tomb at Winter Solstice.

The Deputy First Minister unveiled the animation of the 5,000-year-old tomb at a special reception in Kirkwall on Tuesday evening (August 28), held to celebrate the ‘2012, Year of Creative Scotland’ programme.

The virtual tour of Maeshowe has been created using 3D laser-scanning data collected to aid with the conservation and interpretation of the site through the Scottish Ten project – a unique collaboration between Historic Scotland, Glasgow School of Art and CyArk to document Scotland’s five UNESCO World Heritage Sites and five international sites using cutting-edge digital technologies.

The Deputy First Minister also announced that the Scottish Ten team will begin scanning the Eastern Qing Tombs, the final resting place of some of China's best-known emperors – visited by the First Minister Alex Salmond last December – following the Chinese Government’s agreement to incorporate the site into the Scottish Ten project.

Ms Sturgeon, who visited Maeshowe on Tuesday, said: “Maeshowe has fascinated people for millennia with its incredible structure, having been built even before Egypt’s great pyramids.  Now, people on the other side of the world can use this new tour to get a better understanding of the ancient and magical history Scotland has on offer.

“This is a special moment for the Scottish Ten project, which will see all five Scottish World Heritage Sites and five international sites digitally recorded using laser-scanning technology. The work will aid in their conservation and the practical data has also allowed the creation of a beautiful vision of Maeshowe at the Winter Solstice, to educate and inspire people to come to see it for themselves, along with the other treasures of Orkney’s Neolithic World Heritage Site.”

The Heart of Neolithic Orkney World Heritage Site comprises Maeshowe, the Stones of Stenness, the Barnhouse settlement, Skara Brae prehistoric village and the famous standing stones of the Ring of Brodgar.

The Scottish Ten team – made up of staff from Historic Scotland and Glasgow School of Art’s Digital Design Studio – accurately laser-scanned all of the monuments in late 2010.  This works by projecting laser beams against the monument millions of times to get precise measurements that then form digital models.

These initial images were then developed by the Digital Design Studio to give the visualisation of travelling through the passage entrance of the tomb into the large chamber at its heart.

The accuracy of the recording has produced clear images of the Viking inscriptions carved inside the wall in the mid-12th century. The tour then returns to the exterior of the tomb to show how it now appears as a grassy mound in the middle of a field before showing an intersection to demonstrate how it was constructed.

The gently sloping passage into the tomb is carefully aligned so that at sunset during the three weeks before and after the Winter Solstice – the shortest day of the year on December 21st – the light of the setting sun shines straight down it and illuminates the rear wall and central chamber. A recreation of this phenomenon completes the tour.

In addition to the tomb, images of the Orkney stone circles and standing stones were also recorded by the team are available to view at www.scottishten.org.

The recording of the other four Scottish World Heritage Sites – New Lanark, St Kilda, the Old and New Towns of Edinburgh and the Antonine Wall – is ongoing. Images from the completed international sites of Mount Rushmore in South Dakota, USA, and Rani ki Vav stepwell in Gujarat, India, are also online.

With scanning due to begin at the Eastern Qing Tombs later this year, the Scottish Ten team, in 2013, will complete their recording of Edinburgh and begin onsite at the Antonine Wall.

The remaining two international heritage sites to be digitally captured by the team have yet to be determined.

Historic Scotland is an executive agency of the Scottish Government charged with safeguarding the nation’s historic environment. The agency is fully accountable to Scottish Ministers and through them to the Scottish Parliament. For more information visit www.historic-scotland.gov.uk

Category:
Activities
Historical
About the Author