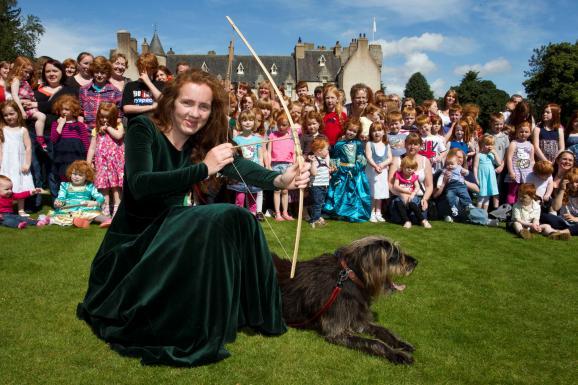 Word of Scotland’s first ever ‘Ginger Snap’ – a flash mobs of redheads that gathered at Drum Castle on Friday 3 August to celebrate the release of Disney Pixar’s movie Brave – has reached far and wide.

The news of the event which drew more than 250 flame-haired folks to the Aberdeenshire property reached the film’s director Brenda Chapman who said:

“My hat is off to The National Trust for Scotland, organizers of the Ginger Snap. What a fun idea!”

Writing on her blog at brenda-chapman.com, Brenda added:

“Who knows—maybe the idea of these ginger-haired flash mobs will spread beyond Scotland and redheads around the globe can unite in a celebration of their hair, heritage and a strong princess who knows what she wants—and isn’t afraid to pursue her dreams. If that’s not an excuse to gather together and let our hair down (pun intended), well, I don’t know what is!”

All the redheads attending on Friday enjoyed free entry to the castle, getting a taste of Scotland’s rich heritage which has inspired the movie.

As a fellow ginger, I say, Hats Off to Brave!

Category:
Activities
Events
About the Author