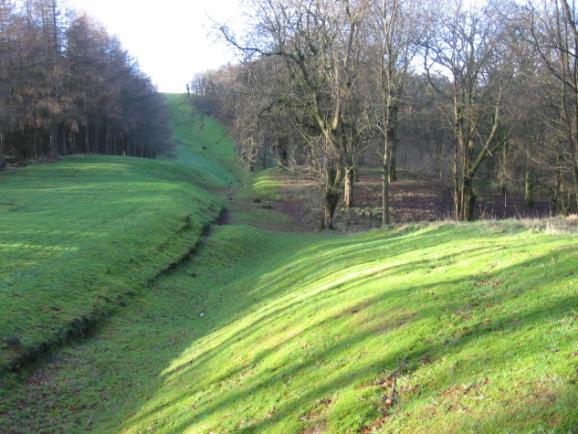 Very few people who have visited Hadrian’s Wall in northern England have even heard of, let alone visited, Scotland’s Antonine Wall. Constructed about twenty years later than Hadrian’s Wall, the Antonine Wall is one of the archaeological sites that makes up the umbrella UNESCO World Heritage Site ‘Frontiers of the Roman Empire’. Although the wall originally ran for 63 kms from the River Forth in the east to the River Clyde in the west, it is not as complete as its English counterpart further south. Nonetheless, sufficient portions remain to make for an enjoyable walk.

Just as Hadrian’s Wall was built under the Roman Emperor Hadrian’s orders, the Antonine Wall was ordered by the emperor Antoninus Pius. For a long time it has been generally accepted that both walls were built to protect the Empire, more specifically Provincia Britannia, from the Barbarians who lived to the north in what is Scotland today. Scholars now feel this is probably too simple an interpretation, as they do not agree on how much of a threat the so-called Barbarians actually presented the Romans. Just as likely so it seems, Hadrian’s wall was built (construction began in 122 AD) as an expression of power and dominance, or to control the movement of migrants and goods.

Again for reasons that are not entirely clear, in 142 AD Antoninus extended the frontier northwards by some 160 kms. This new frontier line was then protected by stone based turf wall, built along the stretch between the Firth of Forth and the Firth of Clyde. The wall was completed in 12 years, and it was only guarded by troops for about 20 years before it was abandoned and the Roman troops retreated back to Hadrian’s Wall.

Given the wall was not built of stone as the wall to the south was, and as it passes through some densely populated and built up areas, it is not that well preserved. But there are portions of the turf ramparts that are quite well preserved, and the remains of forts have been excavated along the line of defense. 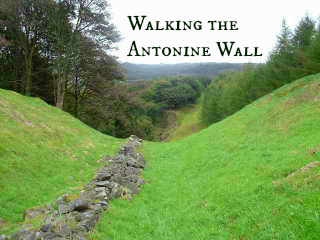 The best preserved fort can be found at Rough Castle, just two kilometres east of Bonnybridge.

Rough Castle, Antonine Wall, drawn by William Roy in 1755
Photo: Wikimedia Commons: Proceedings of the Society of Antiquaries of Scotland

Besides the remains of what was one of the smaller forts along the wall, visitors are able to get a good view of the turf ramparts and ditches that made up the wall. Excavations revealed the foundations of what were the commanders house, barracks, bath house and granary. One feature to look out for here are the so-called ‘lilias’, a series of pits to the north-west of the wall. It would have been in these pits that the Romans placed sharpened stakes, in an attempt to defend the gateway.

It was on this estate that James Watt tested his steam engines, and his workshop cottage as well as a small museum with displays of the Roman artefacts from the wall should not be missed. From Kinneil House it is possible to take a 1.5 km circular walk following the Antonine Wall though some beautifully scenic parkland. And the path has been made good for wheelchair users.

Although, watch the weather conditions as some parts of the path can become waterlogged. Besides following a stretch of the wall, along the way are the remains of a small fort.

These are just a few of the locations where you can visit the Antonine Wall today. Other recommended locations include Callendar Park just outside of Falkirk and the Seabegs Wood Walk out of Bonnyridge. For anyone who has walked or visited Hadrian’s Wall, this, the more northern wall, will be quite different, but every bit as interesting and fascinating, and just as enjoyable given the Scottish landscapes through which this passes.

History of the Antonine Wall, Scotland - and tips on when and where to see it.

Thomas Dowson, one of the Editors here at Journey to Scotland, founded the website Archaeology Travel - part travel blog, part online guide to archaeological sites and museums around the World. Before this he was an active archaeologist, specialising in prehistoric art and the contemporary significance of the past - on which he has published numerous articles and books. When not searching out ruins of the past or looking for the influence of archaeology on contemporary architecture, Thomas lives in Normandy, France. To read more about Thomas’s archaeology travels, follow and connect with him on Facebook, Twitter, or Google+.

App to be created for Antonine Wall visitors