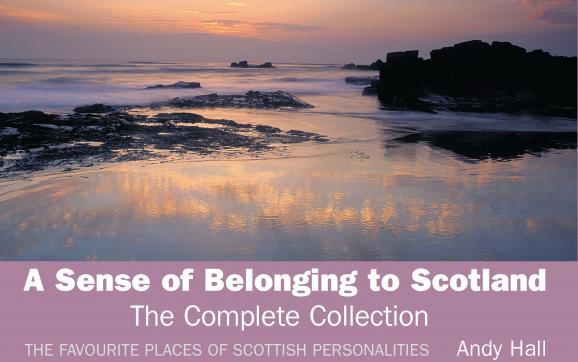 Andy Hall loves the light and the landscapes of his native Scotland. As a photographer, he also enjoys finding ways to share that love. For his book A Sense of Belonging to Scotland, he decided to investigate and share what places hold significance for other Scots.

Politicians, actors, sports figures, journalists, musicians; some whose names are well known across the the world and others who are better known within the bounds of Scotland: Hall asked each person to choose a well-loved place. He then spent hours and days and months and miles and seasons to create photographs of these places. He asked each person to write a short paragraph or two to go along with the photographs he created.

There are city views, isolated beaches, rocky cliff, mountains, lochs, and just about every other sort of place you could imagine for subjects. The reasons people chose them are just as varied. Both the photographs and the commentary do indeed offer a sense of belonging to Scotland in word, image, and idea.

Here are a few excerpts:

“I saw Loch Eck for the first time when I was three months old. Since then I’ve played on its banks, picnicked on its beaches, swum in its chilly unsalted depths, cycled round it, drunk it, got drunk near it, kissed in boats on it, seen it change from blue to green to wizened old grey... made a film by it, got married near it, and never wearied of it...”  actress Emma Thompson (who among her many credits is the voice of Queen Elinor. Merida’s mother, in the animated film Brave) on Loch Eck, Cowal

“...I have to say this photograph perfectly captures my favourite view of the refinery. It has a magical quality at night, particularly at Christmastime. I always used to think it was the finest display of fairy lights in the land...” broadcaster Kaye Adams on Grangemouth Refinery at Night, Stirlingshire

“Above my house in Butterstone is a hill called Benachally. On top is a beautiful stone cairn... The hill can be seen from some distance away, and on returning from long concert tours I knew that when Benachally came into view I was almost home!” musician Dougie Maclean on Benachally, Butterstone, Perthshire

“To me, the Oxford Bar is an oasis. When I see that old, battered sign, I know I’m near friends and kindred spirits...” author Ian Rankin on The Oxford Bar, Edinburgh