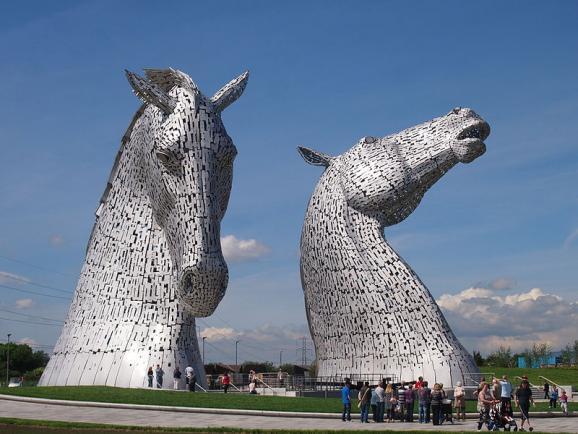 Art, engineering, history, legend -- The Kelpies have connection to all these things, and a few more. But wait, you may be thinking, what are The Kelpies anyway?

Works of art, works of engineering, a new feature in the landscape in the east of Scotland, The Kelpies are metal sculptures of two horse heads, one turned down toward the land, one rearing back against the sky. They stand thirty meters -- about one hundred feet -- high each, and are part of The Helix, a park land near Falkirk.

There were, and are, several ideas at play in understanding this work of art. The working horse goes back long through history in Scotland, from horses as partners in farm work to companions in battle to main ways of transport over distances long and short. Horses often provided the power to pull wagons, and when canals were added to roads as means to transport goods and people, horses walking along canal banks provided engines for this sort of transport, as well.

The horse goes back in legend, too. One of those legends is the source for the name of the sculptures: kelpies, in legend, were waterhorses -- that was one of their forms, anyway, as they could and did take many shapeshifting ways though legend. For good or ill, as friend or foe to humans involved in these tales, the kelpie most often returned eventually to the form of the waterhorse.

Andy Scott, the artist who designed The Kelpies, had both these ideas in mind as he began to consider what he would create. Over time, however, he found the idea of the working horse coming to the fore. "Falkirk was my father's home town and that inherited link to the town has been one of my driving inspirations. A sense of deep personal legacy has informed my thinking from the outset, with old family connections anchoring me to the project," he writes in his artist's statement about The Kelpies. "I frequently tackle the theme of equine sculpture in my practice. In almost every project, they are related to the site, the audience, history, or a combination of themes."

That was so as he began work on The Kelpies, finding that the industrial history of the Falkirk/Grangemouth area seemed to him the best way to blend the story of working horses and the ideas come down in myth. "The ancient ethereal water spirits have been forged into engineered monuments," he writes. He used two Clydesdales of Glasgow City Council as models, while using his creative vision to allow suggestion of other heavy horses of Scottish industrial history, as well. The engineering of the structure and the materials were part of what Scott connected with this purpose, too. "The towering horse heads have an industrial aesthetic with structural columns and beams visible through the riveted laser cut steel plates of the skin, the manes rendered as geometric overlapping slabs of steel," he explains.

Indeed, they do. Whether you pass them by in the distance, come up close to look them over, or take a tour to see their interior structure, The Kelpies are certainly a distinctive and dramatic feature of the landscape, one that is capable of many interpretations.

Falkirk itself lies in the Forth and Clyde Valley, and is the site, among other things, of the unique Falkirk Wheel, which transports boats between levels of the Union and Forth and Clyde Canals. Part of the Antonine Wall, dating from Roman times, runs through Falkirk. The Kelpies themselves are part of The Helix, a developing recreational area with cycle paths, walking routes, and play parks for children, as well as, as Scott writes of his intention for The Kelpies sculptures, "Water-borne, towering gateways into the canal system, The Helix park, and the nation, translating the legacy of the area into proud equine guardians."

However much there is focus on the legacy and presence of real working horses, there is still, too, that name...and the legend. For a whisper of that, give a listen to Julie Fowlis as she sings an old Gaelic song of a woman meeting with a waterhorse. Fowlis has recorded the song on her album Gach Sgeul/Every Story.