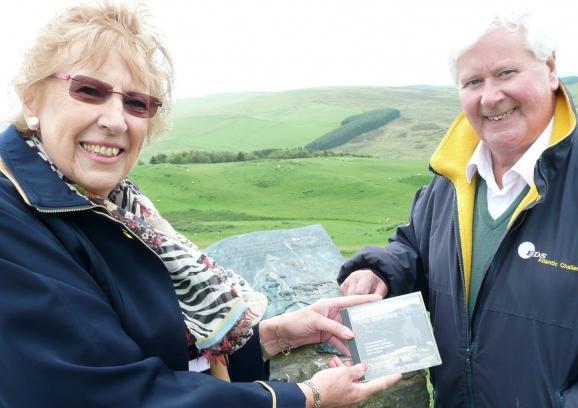 The beauty and tales of the Borders have long been extolled in words and music.

And now a local charity is bringing many of them together in order to raise funds and awareness of its work.

Borders Talking Newspaper has been recording the sounds of the local news in audio form for the visually impaired for 20 years and, to celebrate its anniversary and that of producing its 1000th edition earlier this year, the organisation has produced a cd entitled "Sounds of the Borders" bringing together writers, personalities and musicians associated with the area over the last 200 years.

Many recordings have been produced specially for the cd, while other tracks have been reproduced with the permission of the artistes.

"We hope to not only help raise funds and awareness for Borders Talking Newspaper, but also to do our bit for the region," Vice-Convenor Joy Chatters says.

"We have had great support from everyone who has contributed and from our major sponsors, Borders Fine Arts, Johnstons of Elgin, South East Heating of Selkirk, and the Rotary Clubs of Galashiels and Kelso and others who placed advanced orders, ensuring that the cost of production has been covered and the revenue from all future sales will go directly to BTN funds.

"The front and back cover pictures were donated by David Kilpatrick Photography, Kelso, while the inside picture was provided by amateur photographer and farmer Jim Wilson of Duns and the artwork was finalised by Kelso Graphics, thus saving us further costs.

"The cd will make an ideal present not only for Christmas and other anniversaries, but for tourists to take home and for exiles who will be here for the Common Ridings," Joy added.

Top Borders group Scocha and author Alistair Moffat set the scene on the opening two tracks with "Our Borderland" and a reading from the introduction of "Heartland" respectively, while round-the-world yachtsman Sir Chay Blyth remembers his childhood playing up near the Ale Water in a reading of W.H. Ogilvie's "The Hill Road to Roberton."

Two of the best known sounds of the Borders — the Voice of Rugby, Bill McLaren and the Voice of the Tattoo, Alasdair Hutton, one of the Patrons of BTN — are featured and there are songs and readings from Hawick folk Henry Douglas, Joyce Tinlin and Ian Landles.

Edinburgh-based folk singer Shona McMillan made a special recording of "The Eyemouth Disaster" and Birgham's Lori Watson sings her arrangement of Ettrick Shepherd James Hogg's "Maggie," a song which has brought her great popularity at home and on foreign tours.

Other Border songs include "Yarrow's Green Braes" written by Selkirk's John Nichol and sung by Yarrow's Hilary Bell, "The Rolling Hills of the Borders" by members of the Rolling Hills Folk Club, from Melrose, and a live track from Kelso Folk Club's Friday night session at The Cobbles, Kelso.

The late John Wright, who sadly died as he was making a real name for himself, not only in Scotland and the North of England, but much further afield, features on two tracks, "Lock the Door Lariston" and "Peace on the Border" which also includes the ever popular Maddy Prior.

While Hogg is honoured on three tracks, the Borders most famous writer, Sir Walter Scott, is certainly not forgotten. An extract from "The Lay of the Minstrel" is read by Prof David Purdie, Chairman of the Sir Walter Scott Club of Edinburgh.