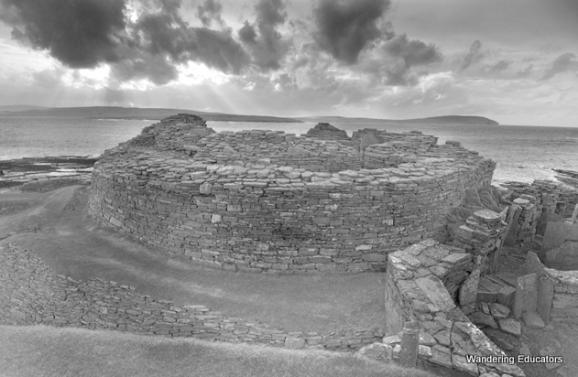 A new guidebook celebrating the diverse cultural heritage of the Orkney Islands has been produced by Historic Scotland, examining a built legacy that incorporates prehistoric villages, standing stones, brochs, palaces and a cathedral.

The publication is filled with eye-catching photography and colourful illustrations, and is written in a lively and accessible style. It marks the first re-issue in almost 20 years of the agency’s overview of Orkney, and incorporates new research illuminating this fascinating archipelago.

The cluster of spectacular Neolithic monuments form a World Heritage Site, and include Skara Brae and Maeshowe, complemented by iconic structures such as the Norse-built St Magnus Cathedral and Renaissance gem the Earl’s Palace.

Historic Scotland’s Publications Manager, Andrew Burnet said: “Orkney is amazingly rich in historic and prehistoric sites, some dating back more than 5,000 years, and taken together, they offer a vivid glimpse of the past.

“From earliest times, a shortage of timber forced the people here to use local stone to create their dwellings and monuments, resulting in the extraordinary legacy we see today.”

Author Caroline Wickham-Jones, who lives and works in Orkney, made her first archaeological foray as student, when she joined the National Museum of Scotland excavations at Skara Brae.

She has since worked on sites including Links of Noltland and Long Howe, and her current research is investigating the changing landscape of Orkney, particularly alterations in sea levels and the impact of rising seas on the people of the islands.

The guidebook ranges from 7000 BC through Neolithic settlers to Bronze Age, Iron Age and Pictish Orkney, and on to the Norse years, the Scottish Earls and the industrial age, concluding with the twentieth century, the Second World War, and the modern era.

This broad historical sweep is captured in the descriptions of more than 60 monuments, some of which may surprise readers unfamiliar with the islands – such as the 19km-long sheep dyke on North Ronaldsay, or the numerous burnt mounds dotted around the archipelago, the uses of which are still uncertain.

“Monuments of Orkney – A Visitor’s Guide”, priced at £5.95, is available from all staffed Historic Scotland sites in Orkney.

Photo caption: The dramatic setting of the Iron Age broch at Midhowe, on the island of Rousay, is captured perfectly in this image from the new guidebook.