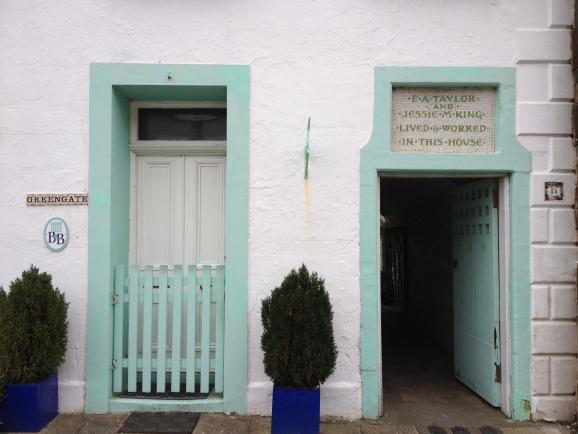 The site already contains over 180 records but the aim is to build on this base to create a comprehensive national database.

From Shetland to the Borders, the Western Isles to Fife, women have made a huge contribution to national life in all fields and many are commemorated in various ways in towns and cities and in small communities. A number are featured in The Biographical Dictionary of Scottish Women (Edinburgh University Press, 2005).

Examples found so far range from plaques and cairns to statues, streets, named buildings and stained glass windows. All commemorate the contribution that women have made to Scottish life. It is a rich and fascinating story.

In Dunrossness on the Shetland Mainland, a stone records the misadventures of 60-year-old Betty Mouat in 1886: ‘[She] was the sole passenger on the smack “Columbine” from Grutness, to Lerwick. By accident the smack lost its crew. Betty, alone on board, endured eight days and nights of drifting in stormy seas until grounding on the Island of Lepsøy near Ålesund in Norway, where local people rescued and cared for her.’ She became something of a cause célèbre in Victorian society and, despite her ordeal, lived to be 93.

Less fortunate was the young Glasgow School of Art student, Catherine Watson, who drowned in the East Bay, North Berwick, on 27th July 1889 while rescuing a drowning child. Her sacrifice is commemorated by a stone cross with a bronze portrait panel designed by her fellow students, erected on Anchor Green, North Berwick in 1889.

Over the past year Girlguiding Scotland has helped to seek out memorials to add to the site, but now more help is needed. We are calling on people across Scotland to visit the Women of Scotland website and record details of the memorials they find.

Women's History Scotland exists to promote study and research in women's and gender history, particularly for those working in Scotland or working on Scottish themes. It has a commitment to history at all levels and aims to provide a network of information and support to all.

Glasgow Women's Library (GWL) celebrates the lives and achievements of women, and champions their contributions to Scotland’s culture. Open to all, GWL is home to a lending library, archives and historical artefacts relating to women’s lives, histories and achievements. It also provides an exciting range of events, from walking tours that explore the history of women in Glasgow to book readings by celebrated women authors. GWL is a safe, friendly and inspiring environment where women can access the information and opportunities they need to change their lives for the better.

More information about Glasgow Women’s Library can be found at womenslibrary.org.uk

Girlguiding Scotland, as part of a worldwide Movement, enables girls and young women to fulfil their potential and to take an active and responsible role in society through their distinctive, stimulating and enjoyable programme of activities delivered by trained volunteer leaders. Girlguiding Scotland is the largest voluntary organisation for girls and young women in Scotland.

More information about Girlguiding Scotland is available at girlguidingscotland.org.uk