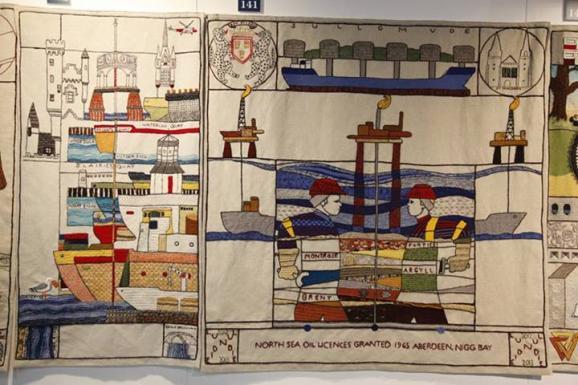 Ever want to see the history of Scotland, in one place? Head to the Scottish Parliament in Edinburgh this month to see it! The free exhibition is in the Main Hall from 3-21 September, 2013. The Great Tapestry will tour Scotland, after that.

The Great Tapestry of Scotland is the longest tapestry in the world, coming in at 143 metres long. In contrast, the Bayeux Tapestry is 70 meters long, and the Kieskamma tapestry (South Africa) is 120 metres.

It has taken over a year to complete, with each of the 160 panels taking over 500 hours to complete! The panels represent the 420 million years of Scotland's history.

The Great Tapestry Project was developed by esteemed Scottish writer Alexander McCall Smith, artist Andrew Crummy and historical writer Alistair Moffat bring together hundreds of volunteer stitchers from across Scotland to create a record-breaking 143 metre long embroidered tapestry, beautifully illustrating the history of Scotland, from a land locked in ice and carved by glaciers, to the reconvening of the Scottish Parliament in 1999, the panels depict Scotland’s fascinating history, science, culture, industry and politics over the centuries.

Alexadner McCall Smith notes: "Now we have it: a record of our history, designed by an artist whose eye has captured the essence of Scotland, and stitched with love by hundreds of people throughout the land. They invite you to look at this and celebrate our country."

take a listen to the story:
http://scotlandstapestry.com/files/the-great-tapestry-of-scotland.mp3

Want to make your own panel for yourself? Available in the Parliament shop:

The Great Tapestry of Scotland is the longest tapestry in the world, and covers in 160 panels 420 million years of Scotland's history