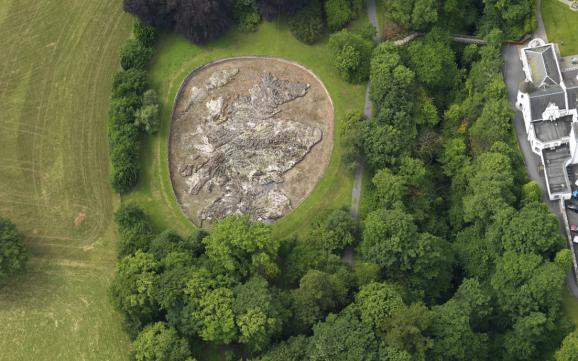 The Great Polish Map of Scotland, a vast three-dimensional concrete representation of the country in the grounds of a rural Scottish Borders hotel, has been awarded B-listed status.

This map, one of the largest of its kind in the world, has been recognised by Historic Scotland for its contribution to the nation’s built heritage. Created as a physical reminder of the consequences of war, it also symbolises the wider collaboration between the two nations.

Built by a group of Polish nationals in 1974 to thank the Scots for their hospitality towards Polish soldiers during the World War Two, and to commemorate the war efforts of their countrymen, the Map sits in an oval pool 50m wide and 1.5m deep, which once held gravity-fed water recreating rivers, lochs and seas.

Currently the focus a major restoration programme to return the structure to its former glory, the Map complements the stunning grounds of Barony Castle Hotel at Eddleston village, five miles north of Peebles.

Welcoming the listing, the Cabinet Secretary for Culture and External Affairs Fiona Hyslop said: “This remarkable map of Scotland recalls the sacrifices of our Polish Allies, and I am delighted it will now be protected and secured for future generations through the awarding of listed status.

“The hospitality of the Scots is known throughout the world, and we are honoured that the designers also chose to create this Map in recognition of the warm welcome given to Polish soldiers.

“I am hopeful that listed status will raise the profile of the Map, and attract the increased numbers of visitors which this remarkable structure rightly deserves.”

The campaign now underway to restore the Map began in April 2010, when a group of volunteers constituted Mapa Scotland, a charitable trust which has now secured Heritage Lottery funding to advance its plans.

Mapa secretary Keith Burns said: “Historic Scotland’s listing will help us to save the Great Map of Scotland as a part of our heritage links with Poland. Along with support from the Heritage Lottery Fund and the new land owners, we’re looking forward to preserving its future security for the benefit of the new generation of young Scots and Poles, and for all who visit this beautiful corner of the Borders.”

“The Map represents an important part of Barony Castle’s history, and it is a great honour to have such an historic masterpiece on the grounds of the hotel. This recognition, along with the fundraising to restore the Map to its deserving former glory, will undoubtedly bring additional visitors to the area and safeguard it for future generations.”

The idea for the Map is believed to have originated with Jan Tomasik, proprietor of Barony Castle Hotel from 1969 to 1977. This veteran of World War Two settled in Scotland after the conflict ended, and developed his concept for the Map with input from his former commander, General Stanislav Mazcek, who had also settled in Scotland.

Their proposal was inspired by the Hotel’s use during the war as a college for Polish army officers. The grounds had also been used as the site of a terrain map showing key roads, railways and locations of military units, which would have helped with strategic planning and theoretical training exercises in unfamiliar terrain.

Tomasik and Mazcek created their Great Polish Map on a scale of 1:10,000, and invited five Polish geographers from Jagiellonian University in Krakow to build the structure. The group visited Scotland in summer 1974, and prepared the site and completed the coastal outline in just three weeks.

Surface modelling, requiring an artistic eye for accuracy and proportion across the huge surface of the Map, was finished between May and June the following year.

With elevations increased accurately by five times to improve the visual impression of mountains, valleys and islands, the completed project became the largest topographical relief model of its kind in the United Kingdom. The Map is still believed to be the largest in the UK, by some distance.

The precise survey techniques and intuitive handcrafting used in its construction have created a vivid 3D representation of Scotland, which today is best appreciated from the viewing platform on the edge of the former pool.

This aerial shot of the Great Polish Map of Scotland, in the grounds of Barony Castle Hotel, Eddleston. Photo is Crown Copyright of RCHAMS