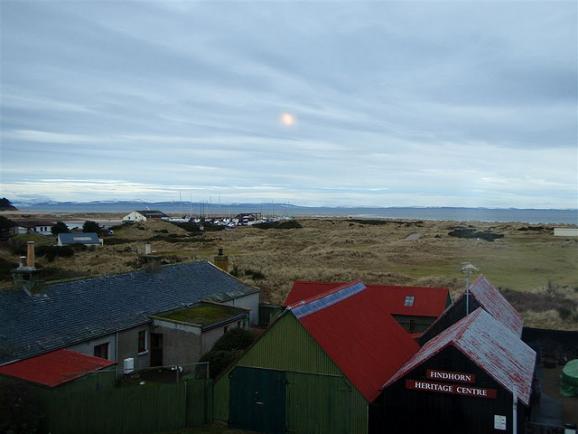 Many flock to Findhorn, a village in Moray, to find solace while enjoying doing satsang with the likes of Eckhart Tolle and other such powerful speakers. Others come to enjoy the scenery for a quick getaway from the city. Either way, both visitors find what they are looking for: tranquility and peace of mind.

The Findhorn Foundation is a charity that was officially established in the 1970s after several spiritual and eco conscious seekers unexpectedly settled there. The Findhorn ecovillage was developed in the 1980s and an organic and sustainable village emerged; in 2002 they even created their own currency, the Eko. This environmentally and spiritually savvy settlement continued to grow in momentum and still does to this day.

A barrel house – made from recycled whisky barrels

The Findhorn Foundation has ‘developed a series of its own workshops and programmes based on 49 years of experience as a centre for holistic learning.’ Spiritual teachers the likes of Carolyn Myss, the famed medical intuitive, teach master classes or hold conferences and talks ranging from astroshamanism to joyful parenting. According to the Findhorn Foundation's website, http://www.findhorn.org/

‘We honour and recognise all the major world religions, and also many new expressions of spiritual principles. Guests and staff follow whichever path they choose for their own spiritual growth. In the community we focus on the common principles which underlie all these paths.’

There are a number of various types of accommodation in the Findhorn area that suits a wide range of budgets. The Lightship Beachhouse is a 10 minute walk from the Findhorn Foundation and is the perfect place for health conscious individuals looking to maintain their vegetarian diet. The Strawbale House sits in the middle of the eco village and has free wifi from 29 pounds per night.

Elizabeth Kelsey Bradley, one of the Editors on Journey to Scotland, is a British American writer and travel photographer that spent much of her youth in the South of France. Passionate about global citizenship and travel, she writes about travel with the UK, Europe, and Asia and hopes to inspire others to follow in her footsteps. A fan of gastronomy, she enjoys promoting small family run businesses and establishments that use organic produce to create unique meals to be remembered. One day she hopes to live in a castle somewhere in the Highlands.