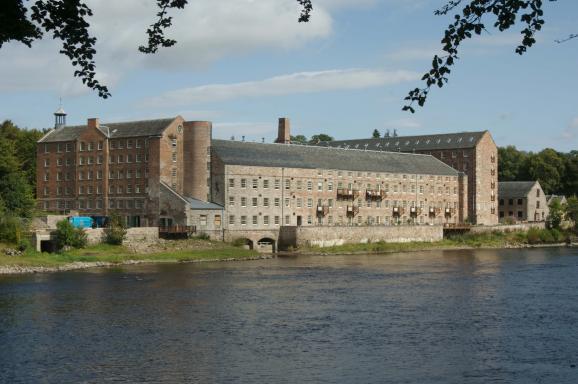 An Historic Scotland book which helped bolster the international status of Stanley Mills by highlighting new archaeological discoveries and unprecedented research has received a national award.

“Force and Fabric” was highly commended at the Association for Industrial Archaeology (AIA) annual conference on Sunday, where the book by Michael Cressey and Ron Fitzgerald was recognised for its report on one of the world’s finest surviving cotton mills.

The findings from more than twelve years of research revealed the remarkable evolution of Stanley Mills, transformed through the 18th and 19th centuries from a simple corn mill by inventor and cotton spinning pioneer Richard Arkwright.

“Force and Fabric” is illustrated with contemporary and archive photos and detailed drawings tracking the progress of the project. Arkwright’s plan to “find a razor in Scotland to shave Manchester” resulted in the creation of extraordinary technologies at Stanley Mills, including massive cast-iron framed wheels and giant wheel pits.

At Historic Scotland, Deputy Head of Industrial Heritage Mark Watson said: “It was only through archaeological excavation that we were able to develop a fundamental understanding of the site.

“Our research showed how the use of water power evolved from the use of wooden waterwheels in the original corn mill to the iron waterwheels of the Industrial Revolution, and then on to early turbines.”

“Force and Fabric”, published in 2011, examines the long vanished waterwheels that formed a focus for the archaeological explorations. The co-authors said there was substantial evidence within the Mills’ waterwheel pits to allow a reconstruction of the different generations of water and turbine power.

Here the researchers made a surprising discovery. The arrangement of wheelpits was unusual, and possibly unique in the use of kinetic and hydrostatic power.

The archaeological evidence for the different stages of water power has now been transferred to a series of outdoor interpretative display boards, which take the visitor to Stanley through each successive stage.

Coloured paving stone corresponding with the archaeological footprint of the corn mill has also enhanced interpretation at the site.

Stanley Mills, located off the A9 road around seven miles north of Perth, continued functioning until 1965, and closed in 1989. It was only saved from demolition by the intervention of Historic Scotland, with support from the Heritage Lottery Fund.

Guided by the Stanley Mills Steering Group, the agency entered a partnership with the Prince’s Regeneration Trust, allowing part of the site to be converted to residential housing.

Today, Stanley Mills can lay claim to being the most thoroughly researched textile mill in Scotland, as well as being the least altered Arkwright mill of its type in the United Kingdom.

For Historic Scotland, in addition to yielding a huge amount of invaluable archaeological information, it has also become an outstanding and successful visitor attraction.

The award won by “Force and Fabric”, recognising high standards in research in local society publications on industrial archaeology, was accepted by Historic Scotland at the AIA annual conference at Writtle College, Essex.

Photo: Stanley Mills, one of the world’s finest surviving cotton mills, is the subject of the award-winning book “Force and Fabric”, by Michael Cressey and Ron Fitzgerald.