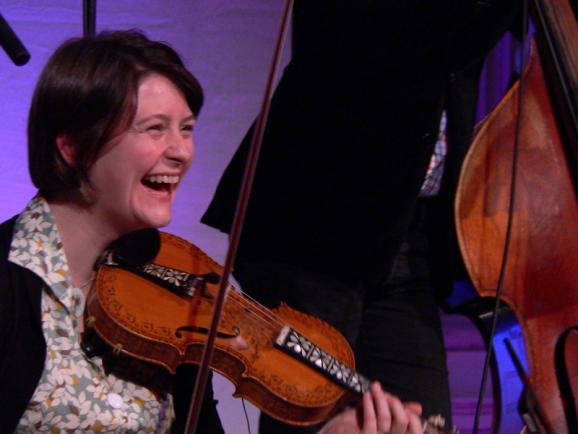 Sarah-Jane Summers is a fiddle player, composer, and music tutor whose family roots run back for generations in the Highlands of Scotland. Love of music and playing the fiddle are part of her family heritage as well: Sarah-Jane was one of the last students who learnt fiddle with Donald Riddell, who learnt his fiddling from a relative of hers, Alexander Grant of Battangorm.

In addition to her love for the music of her native Highlands, Sarah-Jane has also been drawn to Nordic music and the Hardanger fiddle, and has taken post graduate study in Nordic music in Norway. Combining her love of and skill in both styles, she is a founding member of the Nordic and Scotland music band Fribo and the trio Mala Fama, and she often appears as a duo with guitarist Juhani Silvola. Summers also collaborates with three other Scottish women fiddle players as the quartet RANT. She has recorded with all these groups and has a solo album, Nesta, which includes traditional and original music, and a self-titled duo album with Juhani Silvola, which also comprises traditional and original pieces. Her sparking style and gift for tempo and tone find her appearing as a guest artist on others’ projects also.

In addition to her recording and concert work, Sarah-Jane’s deep knowledge of Highland fiddle style and of the history and culture from which it arises as well as her lively wit and skill for passing on her knowledge find her in demand as an educator. She was director of the RSAMD Junior Academy Traditional Music course at the Royal Scottish Academy of Music and Drama (now known as the Royal Conservatoire) in Glasgow, and has taught at fiddle schools and festivals from New Zealand to North Carolina as well as all across Europe. She also shares her knowledge of Highland fiddle music and its background of Highland life with a wider audience in her instructional dvd Highland Strathspeys and Fiddle, in which she explores relationships among Highland music, Gaelic language, and traditional dance as she teaches technique.

Sarah-Jane Summers is a fiddle player, composer, and music tutor whose family roots run back for generations in the Highlands of Scotland