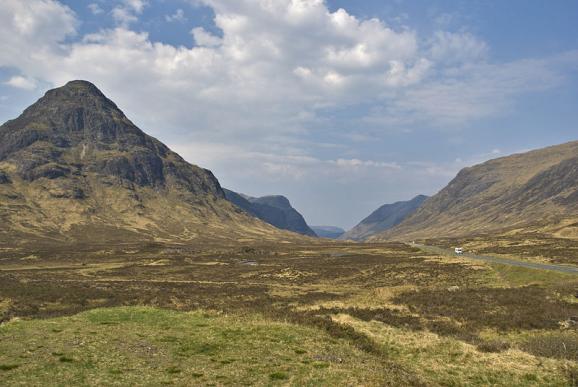 What *was* that song which played over the credits in Outlander?

The melody might be hauntingly familiar, whether you know the music of Scotland or not, but the words... they are not what you remember.

That's for good reason. The composer who is writing the music for the series, Los Angeles-based Bear McCreary, wrote the words. In a televised interview, McCreary said that the melody has been his favorite Scottish folk song ever since he was in high school and he’s often worked out ideas for it. McCreary had worked with Outlander executive producer Ronald D. Moore on other projects and when he heard the Outlander film was a go, he sent Moore an idea he had, with lyrics sung by Raya Yarbrough, just as a suggestion. Moore and executives at Starz, which is presenting the series, felt it was just right. “I wanted to evoke our heroine without it actually being her voice,” McCreary has said.

The melody itself is best known as the tune for the Skye Boat Song, a nineteenth century piece with lyrics that tell the legend of Bonnie Prince Charlie escaping to the isle of Skye in the Hebrides after the defeat of Jacobite forces at the battle of Culloden. McCreary kept the final line of the Skye Boat Song chorus, which aside from being a great rhyme, ties things back to the folk process. As far as I recall, none of the action in Outlander takes place on Skye. Claire went through the standing stones to go back in time, though, so perhaps she passed through Skye on the way...

If you are at this point wondering about the standing stones, I’ll just direct you to read or watch Outlander; if you’re thinking who the heck is Bonnie Prince Charlie or where the heck is Skye, here’s a bit of history and geography on the way back to the music -- which actually is a melody far older than Charles Edward Stuart.

Charles Edward Stuart: as the heir to the royal house of Stuart, his cause was to restore a Catholic king to the throne of Britain. Those who supported this cause were known as Jacobites. After some successes, the Jacobite forces were defeated at Culloden near Inverness, and Charles went into hiding in the Highlands and Islands of Scotland, hoping to make it back to France, where he’d lived before all this began. At one point Flora MacDonald, who was living in the Outer Hebrides near where Charles was hiding, was asked to help. She assisted him so he could travel in disguise by boat over to Skye and thence sail to France. Many of the stories about Bonnie Prince Charlie and Flora MacDonald are legends, tales whose truth was romanticized in the Victorian era. The most well known lyrics of the Skye Boat Song grew out of this. Here is a bit of those:

Chorus: Speed, bonnie boat, like a bird on the wing,
Onward the sailors cry;
Carry the lad that's born to be King
Over the sea to Skye.

Loud the winds howl, loud the waves roar,
Thunderclouds rend the air;
Baffled, our foes stand by the shore,
Follow they will not dare.

Though the waves leap, so soft shall ye sleep,
Ocean's a royal bed.
Rocked in the deep, Flora will keep
Watch by your weary head

Where is Skye? It is an island off the northwest coast of Scotland, one of the Inner Hebrides, famed for its dramatic Cullin Hills, the mist which often lingers over them, its music, and its presence as a place where Gaelic is still spoken and sung daily. 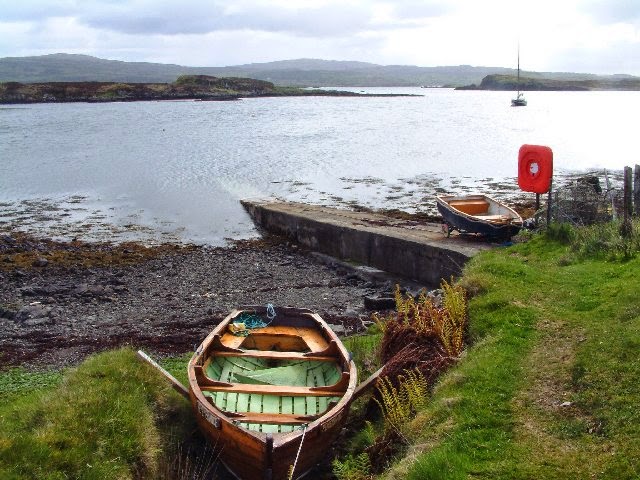 That is, in fact, where the melody for The Skye Boat Song came from -- boatmen singing a rowing song in Gaelic, a song in which the singer tells of his sadness at being rejected in love. In Gaelic it is called Cuachag nan Craobh, and its origins go back into time. In the nineteenth century Anne MacLeod was taking a journey over to Skye and heard the song, and wrote down what she remembered of the melody. The most familiar set of words, that dealing with Flora MacDonald and Bonnie Prince Charlie, were written by Sir Harold Boulton and first published in a book called Songs of the North in 1888. The words and the melody became, and remain, widely popular, in the twentieth century reaching the repertoire of such varied singers as Paul Robeson, Roger Whittaker, and Rod Stewart.

Barbara Dickson, a native Scot who started off in folk music and when her career took a different turn found great success on the London stage, has one of the best mainstream versions of the song:

The Corries take another approach

and the melody stands hauntingly on its own, in this version from Tom Stormcrowe

No doubt, Bear McCreary and Raya Yarbrough have added to the history of the song, a song which has roots in the mystery of the Scottish landscape, the sounds of Gaelic, and the legends of Jacobite times.

Those things, in fact, bring it full circle with the stories told in Outlander.

***
Kerry Dexter is an editor at Journey to Scotland, where you may often find her writing about places, events, and people connected to music, history and the arts. You may reach Kerry at music at wanderingeducators dot com

What *was* that song which played over the credits in Outlander? The melody might be hauntingly familiar, whether you know the music of Scotland or not, but the words... they are not what you remember.

A day out fit for a king and queen

1 Response to "Outlander and the Skye Boat Song"

This is so lovely, Kerry - thank you for the backstory!