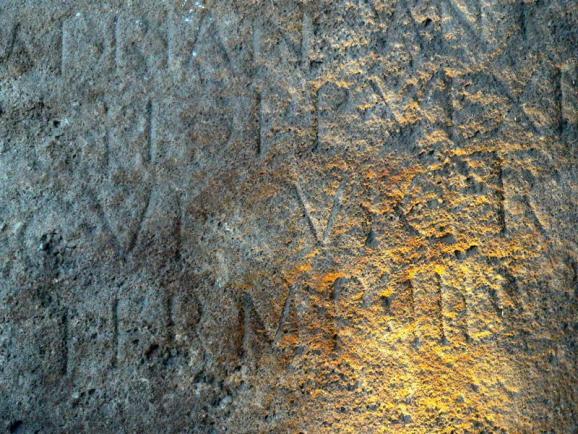 It ran from the mouth of the Clyde, where Glasgow is today, across Scotland to the Firth of Forth where Edinburgh now stands. A wall of turf and rock, at a shade under twelve feet or three and half meters, it was  about twice the height of a man. There was a ditch facing north of about the same depth. It must have been rather imposing. In its time, in the middle of the second century CE, it was the farthest northern boundary of the Roman Empire. More than six thousand soldiers and those who formed communities around them lived along it. This is the Antonine Wall.

Wait, you may be thinking, I thought Hadrian's Wall was the farthest boundary... The Antonine Wall, though, came twenty years later, and lies further north. Its southern cousin, which runs along what is now the northern reaches of England, was built  of stone. That the Antonine Wall was built of turf rather than stone meant that once the Romans left, it was easier for it to settle back into the natural landscape, or to be knocked down, ploughed over, dug up, and otherwise affected by subsequent activities in the area.

From Old Kilpatrick on the west coast to near Bo'ness in the east, the Antonine Wall, when it stood, was around thirty seven miles (sixty kilometers) long. In several places, you can walk along remains of the wall today, especially near Falkirk.

One of the most interesting, and in its own way dramatic, ways to learn about the Antonine wall, though, is to visit the area devoted to it at the Hunterian Museum at the University of Glasgow. 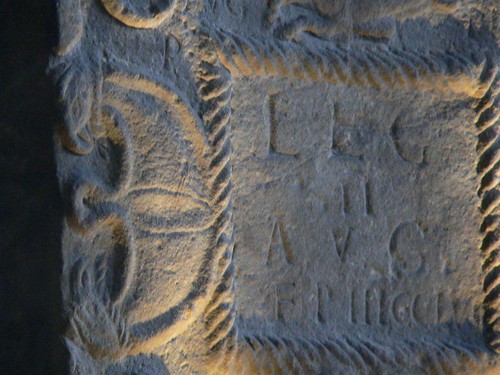 There are large stone slabs there, stones which the various groups of Roman soldiers made to to mark and celebrate the sections of the wall they constructed. These distance slabs have carvings and inscriptions telling of when they completed each section, the legion the men were part of (soldiers of the second, sixth, and twentieth legions of the Roman army built the wall), and carvings that represent legions and groups -- symbols and mascots, if you will -- with which they identified themselves. There are also carvings showing Roman soldiers subduing native tribes.

At the Hunterian, these slabs ring an area which brings life along the Antonine Wall into closer connection. At one time or another ,there were six to seven thousand soldiers stationed at forts and smaller fortlets along the wall. The wall was maintained by the Roman army for not quite twenty years, almost a generation.

Not everything was hostile at the Antonine Wall. Duties may have been of the gatekeeping and supply regulation sort much of the time. In any case, it is clear from what remains that there was interaction with local tradespeople to supply the forts, that people found ways to express their religious beliefs, that they made and used objects to cook, to clean, to wear, to play games, and of course, they built, maintained, and repaired what was needed in their military duties.

At the Hunterian, you can see coins -- perhaps dropped out of a pocket and unnoticed. You can see red Samian ware, bowls people all these centuries ago used for making and eating their food, and larger containers in which food was stored, too. 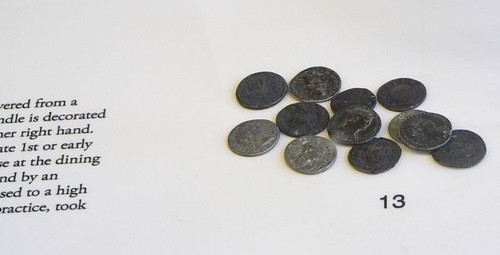 Then there are the shoes -- soldiers' shoes, yes, but there are smaller ones, clearly of women's sizes. There are children's shoes, too. There were families who lived along the Antonine Wall, children who grew up there. 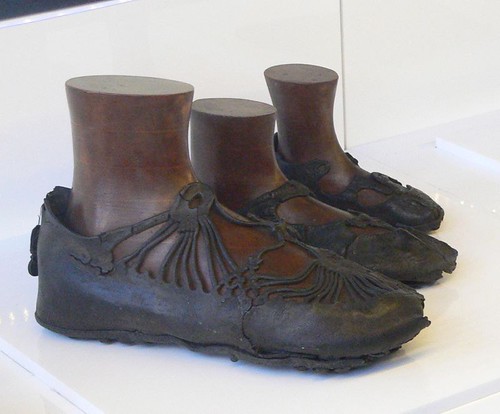 Archaeologists and historians know from Hadrian's Wall and other outposts of the Roman Empire that higher ranking officers often brought their wives and children with them. Once they'd settled into an assignment, career soldiers might have brought family from other outposts along. or formed relationships with local people. Lower ranks were not allowed to marry formally until they retired, but familial bonds were often formed.

As with many outposts of Rome, the soldiers who were stationed at the Antonine Wall were not from Rome or from Italy. Many who helped build this wall were far flung indeed, having come from the middle east or the Baltics to this edge of empire.

When, in 158 CE, word came that troops were to withdraw from the Antonine Wall, it is likely that many of these men were sent to Hadrian's Wall; others went to other outposts across Europe or Asia. What did they do when word came they were to leave?

Though buildings were often destroyed, the wall itself was not. The distance slabs remained. though through the years many were ploughed under or dispersed. The soldiers and their families took many things with them, but others were forgotten, not considered worth taking, too heavy to move, or thrown down wells to dispose.  Across the years, collectors and archaeologists have found them. 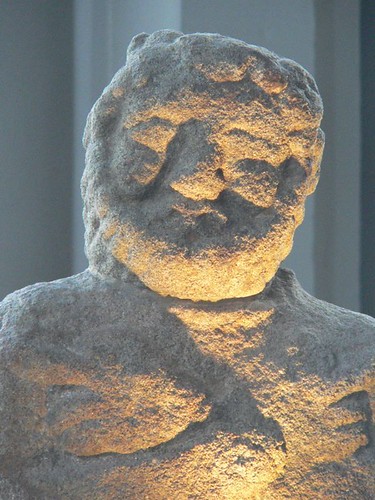 There is much more to the collections at the Hunterian -- that will be for another story or two. It is in fact Scotland's oldest public museum, having been founded in 1807.

In the area concerning the Antonine Wall, you may learn about the building of the wall, what life was like along it for both soldiers and people native to the area, the story of what has happened since those troops withdrew, and continuing archaeological investigations by the University of Glasgow through the last three hundred and fifty years. 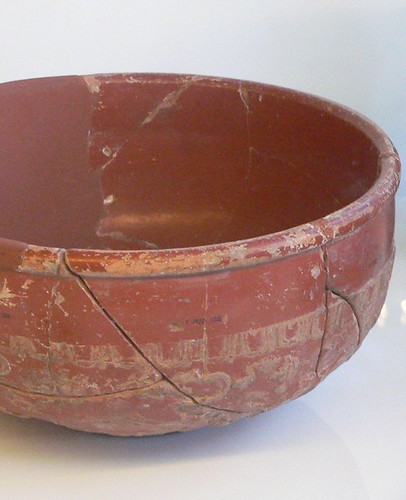 The Hunterian Museum is located in the main building at the University of Glasgow's Gilmore Hill campus in the West End of Glasgow near Kelvingrove Park. The museum is open Tuesdays through Saturdays from 10.00am to 5.00pm and on Sundays from 11.00am to 4.00pm. It is closed on Mondays. Admission is free, though there is sometimes a charge for temporary special exhibitions.

Would you like to learn more about life along the Roman frontier at the time of the Antonine Wall?

In the book Under Another Sky: Journeys in Roman Britain, journalist Charlotte Higgins includes a chapter on her experiences walking the Antonine Wall. Scholar Bronwen Riley imagines what a journey from Rome to and along Hadrian's Wall would have been like for a mid ranking Roman officer in a time just before the Antonine Wall, in her book The Edge of Empire. Though it is about Hadrian's wall, there is much of interest relative to life at the edge of the Roman empire in a free self paced online course called Hadrian's Wall: Life on the Roman Frontier, which is taught by scholars from Newcastle University through Futurelearn.

Kerry Dexter is one of the founders at Journey to Scotland. You may find more of Kerry's work in National Geographic Traveler, Strings, Perceptive Travel, Wandering Educators, Irish Fireside, and other places, as well as at her own site, Music Road.

Photographs by Kerry Dexter. Thank you for respecting copyright.